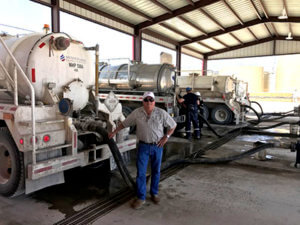 Mr. Hewett’s family has been involved in the oil and gas industry for more than 60 years. As a young man, Mr. Hewett acquired his oil and gas education through the mentorship of his father, who’s started his oil and gas career as a Senior Gas Analyst for Tennessee Gas Transmission, later known as Tenneco. His father’s forty-year career involved traveling the globe extensively and representing the interests of numerous major oil and gas entities. Mr. Hewett’s older brother began his career in the oil and gas industry in the 1960’s as a Regional Sales Manager for Jefferson Chemical Company, which was ultimately acquired by Texaco. This brother later formed Coastal Chemical Company, an oilfield chemical supply company specializing in the manufacture of down hole chemicals.

Mr. Hewett officially began his career in oil and gas as a Senior Account Executive for Major Oil Company, a Houston-based driller/operator. He worked there for a several years structuring programs and analyzing wells. Combining the knowledge he gained from his father and brother, his experience at Major Oil and his own business management, Mr. Hewett founded J&H Oil Company in 1981. During his six-year tenure as Chairman and CEO, the company piloted successful drilling projects in the United States, primarily in Texas. In 1987, Mr. Hewett was appointed Chairman of Omni Financial Group, a registered securities firm in Houston, Texas. Over a period of less than two years, Mr. Hewett was directly responsible for the acquisition, continued operation, and subsequent sale of two retail businesses. While at Omni, he also successfully negotiated the acquisition of several municipal cable television franchises, later driving the sale of them to a large cable television company.

In 1989, Mr. Hewett founded Hew-Tex Oil & Gas Corporation in Houston, Texas. Shortly thereafter, he invited his father, Harold James Hewett II, to join him as Secretary and Treasurer. Together, they began to selectively purchase and develop oil and gas properties. This development has continued for the last twenty seven years, while Mr. Hewett’s leadership has evolved the firm into a well-respected oil and gas production company. Hew-Tex is known throughout the country for its ability to define high quality energy related opportunities and assets.

It was a natural diversification into the saltwater disposal business by Mr. Hewett and the Hew-Tex Oil & Gas management team early in 2017 after the discovery (late 2016) in the Permian Basin of more than 20 billion barrels of proven oil reserves and 16 trillion cubic feet of natural gas reserves that were found through the use of new horizontal drilling extraction techniques and 3-D seismic technology.  The niche that Mr. Hewett decided to diversify into was the result of a hands-on awareness that the operators and producers drilling the hundreds of oil wells, needed to find a way to dispose of the significant volume of saltwater that is produced along with the crude oil in the Permian Basin.

Hew-Tex Oil & Gas, believes that in addition to the its oil and gas drilling and exploration operations, the commercial saltwater disposal business in the West Texas Permian Basin area will continue to be a very lucrative business for years to come. The economics are simple…spend the least amount of capital to build a state-of-the-art disposal facility that has the potential to generate significant cash flow 24/7.

Mr. Hewett is President of Hew-Tex and currently resides in Houston, Texas.

Contact us at (281) 558-7686 or [email protected] to learn more about Hew-Tex’s Saltwater Disposal current efforts in the Permian Basin in West Texas.